Chinese, Japanese and Korean writing systems are not the same!

Riding back on the tube today from my Korean exam, I found myself face to face with the third person in the space of two tube journeys (there and back) asking me what I was reading in Chinese.

This would be fine. Except I wasn't reading anything Chinese.

I was reading my Korean textbook.

I politely explained this to them only to be rewarded with the same answer on all three occasions..."but don't they write with the Chinese pictures?" ( not even characters, pictures!)

My response had I not controlled myself.....

It's not the first time I've had this kind of question. A lot of people, after finding out I study Chinese and Korean, have asked "Don't they use the same writing system?" or "But they're practically the same, no?" but today, for some reason that I'm not sure of, it kind of struck a nerve... (maybe I'm just tired...?!)

As I got back home and poured out my frustration on a friend, I was given some tough love and was harshly reminded that, while I had chosen to surround myself with all things Asian and dedicate my university years to learning to draw these 'pictures', most people hadn't.

I guess, in all honesty, it was a point of realisation for me.

As someone who can read and write in Chinese and Korean and used to be able to do so in Japanese as well, it had almost become an expectation for me that other people could at least tell the three apart. I had become so wrapped up in "Asian-ness" that I'd seemingly forgotten that most people just haven't had that kind of exposure to Asia and wouldn't have had any reason to learn to recognise these Asian scripts, let alone become familiar with them. I say this with no intention of sounding arrogant or anything, it's simply the truth - most people just don't know!

So, I'm going to start changing this. One step at a time!

Below are the three scripts for Japanese, Korean and Chinese - see if you can tell which is which. (Sorry, there are no prizes at this stage!) 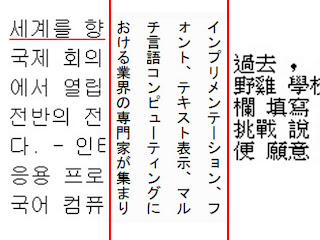 If you didn't know, check out this funny picture which someone posted on my facebook a while ago, I think it's quite funny (and pretty awesome if it means people remember!) 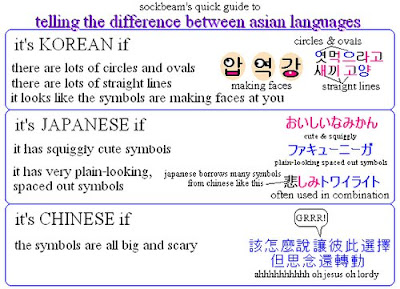 I hope you can now tell the different between Chinese, Korean and Japanese - you better not be one of the people asking me "But don't they all use the same writing system?". I have shown mercy - next time, I am taking no prisoners!!! For anyone interested in the Korean script itself, my next blog will talk about the origins of the Korean script ~ so you can become an expert ^^

Anna
Changsha, Hunan, China
Welcome to my blog~ I'm Anna, 19 years old and currently living in China! I run two blogs - one personal (Life in the City) and one related to Korean culture where I also blog for Korea.net (part of the Korean government)

What everyone else is reading....

Where I have travelled...